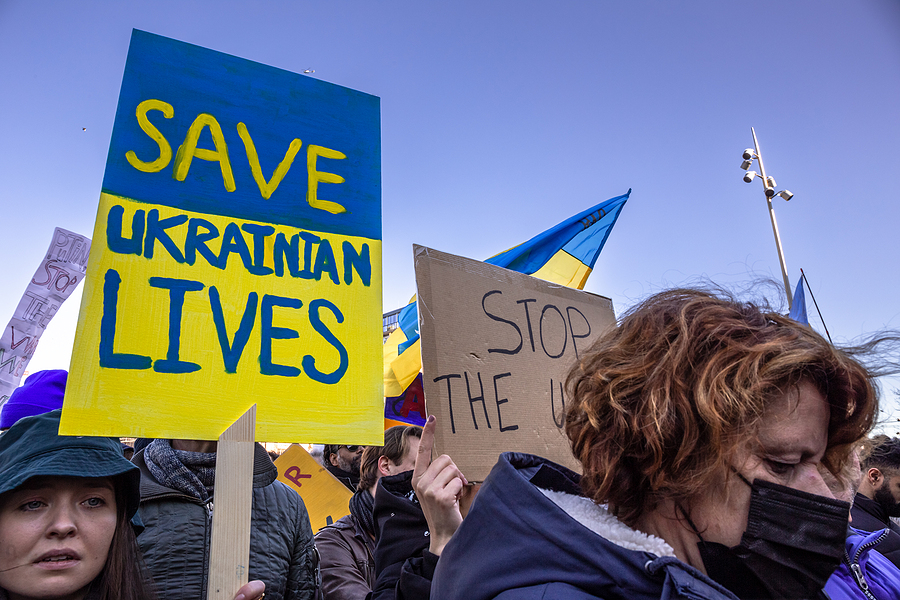 It’s been said that, in order to combat the worst effects of climate change, we need to start operating on something akin to a wartime footing. Well now, thanks to Vladimir Putin, that’s exactly what we've got. The Russian invasion of Ukraine has left all of us wondering what we can do to stop what just about everyone outside of the Kremlin sees as an atrocity.

But the answer isn’t simple. We all know that putting blue and yellow flags on our Facebook feeds is nowhere near enough. Yet at the other end of the scale, we also know that sending NATO troops into direct conflict with Russian ones, with the risk of escalation that entails, is almost certainly far too much.

Somewhere in between those two extremes lie economic sanctions, and here’s where we have a huge problem, and only ourselves to blame.

Even though the West has imposed some of the toughest sanctions ever on the Russian economy, nobody thinks they’re going to work quickly enough to be of much use in the short term. Moreover, what sanctions we have imposed are being seriously undermined by a massive carve-out that still allows Russia to export its plentiful supplies of oil and gas.

Why have we done that? Because we’re still addicted to fossil fuels, and politicians are more afraid of inflation back home than they are of a land war in Europe.

This is akin to boycotting your local supermarket chain because you don’t approve of their labor practices and then sneaking across the picket line a couple of times a week because they happen to stock your favorite brand of chocolate chip cookies. Or, to put it more starkly, it’s like taking the one frustratingly inadequate weapon that you have and choosing to wield it with one hand tied behind your back.

Russia is a 20th century power, led by a 20th century dictator, who derives much of his economic muscle (and, therefore, his military muscle) from selling 20th century resources to a world that really should have weaned themselves off them by now. It’s 2022, almost 50 years after OPEC first held us hostage to oil. Yet here we are again, having to compromise our values, sit on our hands, and allow a thug like Putin literally to get away with murder because we haven’t yet got around to doing what we all know we should have done decades ago.

End our dependence on fossil fuels and the countries that export them. Period.

Depending on how this war works out for him, future historians may one day note that Putin made a huge strategic blunder by invading Ukraine in late February, rather than early November. In past wars, after all, winter has often been Russia’s ally (just ask Napoleon or Hitler). But Putin chose to invade just weeks before the start of spring, and maybe that gives us an opportunity.

We have approximately nine months before winter sets in again across Europe. Nine months to finally take the necessary steps to wean ourselves off of Russian oil and gas. For historical context, that’s about the same amount of time Great Britain had to prepare for World War II.

We must use that time to dramatically ramp up all forms of renewable energy, not just in Europe but all across the free world. We must do this with all the vigor and determination of a world that’s about to go to war. Because, let’s face it, if we can’t make these sanctions bite a lot deeper than they do right now, that is where this might ultimately lead.

And there’s no need to let our political differences get in the way of the task at hand either. There is no right and left in this debate, just good and evil. Putin’s the bad guy, we are the good guys, and there’s no world in which it makes sense for good guys to help bad guys fund their military by buying stuff from them.

So don’t point to the flag on your lapel as proof of how much you care about the plight of Ukraine. Instead, if you own a house, go solar. If you’re in the market for a new car, buy an electric one.  If your furnace is on the fritz, replace it with a heat pump. And if you live in a democracy, use current events to remind your elected officials that climate policy really is a matter of national security.

If we do that, we will soon be able to tell Putin where he can stick his fossil fuels. We’ll be able to tighten the sanctions and punish him far more harshly than we can today. If we can’t get it done, even in the face of such clear and present danger, then we, almost as much as Putin himself, will have condemned the Ukrainian people to years of war and untold suffering.