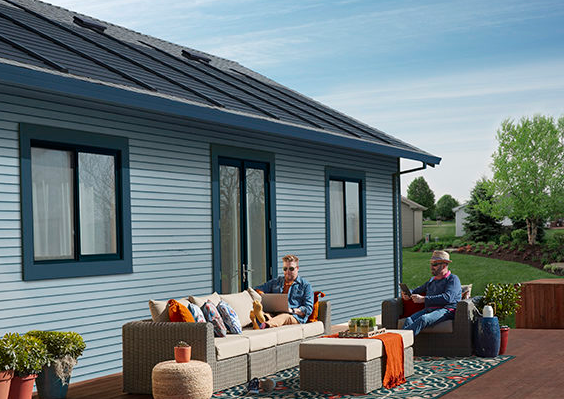 Approximately 5 million homes get new roofs in the United States every year, with about 1.4 million of those being installed by GAF, the largest roofing company in the world.

Meanwhile, only about 300,000 homes add solar panels each year, a pace which leaves even Sunrun, the largest installer of residential solar panels in the country, at just 660,000 customers, despite having been in business for 15 years.

So if the US is going to meet it's goal of completely greening the grid by 2035, it might make sense to enlist the help of the roofing industry. That's why it was a big deal when Standard Industries recently announced that its portfolio company known as GAF Energy has developed a line of solar shingles that will allow traditional roofing contractors to offer solar as an option to customers when they are installing a new roof.

Homeowners interested in solar energy have made rack-mounted solar panels an increasingly common and popular choice, but traditional panels can be expensive to buy and require specialized knowledge to install. Many people also dislike the aesthetic of regular panels, particularly if they have to be placed on the front of the roof.

What's more, Timberline Solar shingles look remarkably similar to traditional ones. They're slightly larger and weigh about twice as much, but otherwise look just like a regular shingle. And since they are mounted at the same time as traditional roofing shingles, they offer a more cohesive look to the finished project. The installation process of solar shingles can also be more affordable than regular solar panels, and there is a lower risk of roof leaks, too.

What About Tesla's Solar Roof?

Of course, longtime solar industry observers will note that we've seen all this before, when Telsa rolled out its own Solar Roof product back in 2016. That didn't work out too well, even after Tesla acquired SolarCity for $2 billion to help it take the roof tiles to market.

The acquisition itself became the subject a lawsuit by shareholders who claimed that Tesla CEO Elon Musk, who also served as SolarCity's Chairman and was its biggest shareholder, was guilty of a conflict of interests. Moreover, with long delays, high installation costs and plenty of what Musk eventually admitted were "significant mistakes", Solar Roof has never come close to living up to its early promise.

The concept was always popular with customers, but the execution often seemed to be lacking.

Tesla concedes that it has found it hard to assess the difficulty of certain roofs, since the complexity of roofing projects varies significantly from home to home. Customers have been hit with serious sticker shock as the final cost for their Solar Roof has sometimes come in two or three times higher than the initial estimates. That has led to Tesla having to refund the deposits of customers who no longer wanted to proceed with installation once they found out the true cost of their solar roofing system.

In spite of all the initial hype, Tesla's solar roof has yet to make any meaningful impact in the industry five years after it's high-profile launch on the set of the Desperate Housewives TV show.

A Solar Shingle, Not a Solar Tile

GAF, of course, has far more experience in roofing than Telsa, which should be a clear advantage in assessing the solar suitability of each individual home. What also makes GAF Energy's product different from Tesla's is that it's a solar shingle, rather than a solar tile. It gets fastened to the roof with a nail gun, just like any other shingle.

The top half is nailed to the roof, while the bottom half overlaps the previous one and remains exposed to the sunlight. The outward-facing section is made of photovoltaic cells, rather than asphalt so that it can generate solar power and transfer it to an inverter through wires on the end of each shingle. The shingles then daisy-chain together.

With the solar shingles being installed at the same time as the rest of the roof, the price of installation can be reduced

GAF Energy offers a 25-year warranty, which is plenty of time for a homeowner to recoup the cost of the solar system through reduced utility bills — especially in states like Massachusetts, where electricity is more expensive.

The Solar Shingle is Not New

It’s a savings proposition that the company hopes will make its product more successful than previous attempts at developing solar shingles, which have been many.

According to Zachary Holman, a professor of engineering at Arizona State University who specializes in solar technology, solar shingles have been around in some form or other for many years. In addition to Tesla's solar roof, other companies such as CertainTeed, Forward, Luma and SunTegra are players in the solar shingles space.

But higher cost compared with regular panels has always been a deterrent, and marketing a solar system that is significantly more expensive than the traditional panel has always presented a challenge. That is where GAF Energy may have a distinct advantage. A solar roof is simply not sold in the same way as a solar panel. It gets marketed as a roofing solution just as much as a clean energy solution.

Solar companies have traditionally marketed their panels with an army of door-to-door sales reps, whose aim has been to convince customers who may have never even considered solar panels before that it's something worth looking into. As such, solar marketing costs are high, averaging as much as $5,000 per acquired customer.

On the other hand, no customer needs to be convinced that they should consider a new roof. They will often determine that themselves and then reach out to a contractor (or several) and ask them to bid for the work. Turning that well-established bidding process into a pitch for a solar roof may be a game-changer when it comes to marketing solar.

While 94% of people have a generally favorable view of solar energy, only 3% of homes actually have panels installed on their roof.

GAF Roofing is partnering with GAF Energy and will work with its network of 10,000 plus roofers to promote their solar shingle instead. The contractor will already be in the home of a ready and willing customer, who most likely called on them, instead of the other way round. And while 94% of people have a generally favorable view of solar power, only 3% of homes actually have panels installed on their roof. That represents a huge opportunity for roofers who can figure out how to sell solar shingles.

It's been long established that a solar roof typically costs more than an array of solar panels. The question now facing GAF Energy is whether it's solar shingles are cheaper than previous iterations of the solar roof, and can it compete on price with regular solar panels.

In other words, can they succeed where Tesla so spectacularly failed. GAF Energy president, Martin DeBono believes they can.

“The potential for solar shingles is enormous,” he says. "When you have a heritage in roofing, and you see solar panels going up the same way in 2020 as they were put up in 1990, you realize there’s an opportunity for innovation.”

When it comes to cost, DeBono uses his own house for a comparison, in which an entire roof plus a 6kW solar panel array would cost about $44,000 new, after all available solar incentives had been taken into account. If, on the other hand, his roof installation were to use GAF Energy solar shingles, that same 6kW solar system would have a net cost of $30,000, saving the homeowner $14,000. So it's clear that for customers who are already in the market for a replacement roof, solar shingles would be well worth looking into.

For customers whose existing roof is still in good condition, though, the cost savings of solar shingles may not be enough to justify the risk of new, untried technology. Cherif Kedir, president of the Renewable Energy Test Center, has concerns about heat. All solar panels generate heat. That's why many solar companies offer critter guards to stop squirrels from nesting in that cozy gap between the panels and the roof.

One potential problem with solar shingles, though, is that they're in direct contact with the roof, with no easy way for that excess heat to escape. While this is unlikely to become a fire risk, it could still cause heat management issues with hotter shingles likely being less efficient, as well as making it more difficult to keep the inside of the house cool in summertime.

Meanwhile, David Fenning, director of the Solar Energy Innovation Laboratory at the University of California at San Diego is concerned about durability. The solar panel has a decades long track record and and can reasonably be expected to last up to 40 years, albeit with a well-known degradation in efficiency. The solar shingle has no such track record.

GAF Energy says its shingles have an efficiency of around 17%, which is slightly lower than the 22% efficiency of traditional solar panels. Nobody knows how well that efficiency will hold up 10, 20 or 30 years after being installed on a homeowner's roof.

Ultimately, it’s up to each individual homeowner to decide whether solar shingles are a good option for their roof. Interested homeowners can contact GAF Energy or reach out to one of its thousands of approved contractors to get started on their own solar roof installation. With prices that are at least competitive with solar panels, and even better for customers who already need to replace their roof, solar shingles may well be worth looking into.